Today the Cook Islands are a self-governing parliamentary democracy in free association with New Zealand.

The main population centres are on the island of Rarotonga (14,153 as of 2006), where there is an international airport. There is also a much larger population of Cook Islanders in New Zealand, particularly the North Island in the 2006 census, 58,008 self-identified as being of ethnic Cook Island Māori descent.

With the ever increasing visitor numbers, tourism is the country's number one industry, and the leading element of the economy, far ahead of offshore banking, pearls, marine and fruit exports.

Defence is the responsibility of New Zealand, in consultation with the Cook Islands and at its request. In recent times, the Cook Islands have adopted an increasingly independent foreign policy.

The Cook Islands are in the South Pacific Ocean, north-east of New Zealand, between French Polynesia and Fiji. There are fifteen major islands, spread over 2.2 million square kilometres of ocean, divided into two distinct groups: the Southern Cook Islands, and the Northern Cook Islands of coral atolls. The islands were formed by volcanic activity; the northern group is older and consists of six atolls (sunken volcanoes topped by coral growth). The climate is moderate to tropical. 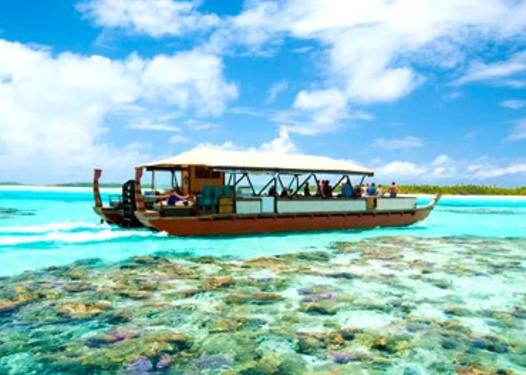 of the Cook IslandS

History
It is believed that the Cook Islands were first settled in the 6th century A.D. by Polynesian people who migrated from nearby Tahiti, to the southeast.

Spanish ships visited the islands in the sixteenth century; the first written record of contact with the Islands came with the sighting of Pukapuka by Spanish sailor Álvaro de Mendaña in 1595 who called it San Bernardo (Saint Bernard). Portuguese-Spaniard Pedro Fernández de Quirós, made the first recorded European landing in the islands when he set foot on Rakahanga in 1606, calling it Gente Hermosa (Beautiful People).

British navigator Captain James Cook arrived in 1773 and 1777 and named the islands the Hervey Islands; the name "Cook Islands", in honour of Cook, appeared on a Russian naval chart published in the 1820s.

In 1813, John Williams, a missionary on the Endeavour (not the same ship as that of Cook), made the first official sighting of the island of Rarotonga.

The first recorded landing on Rarotonga by Europeans was in 1814 by the Cumberland; trouble broke out between the sailors and the Islanders and many were killed on both sides.

The islands saw no more Europeans until missionaries arrived from England in 1821. Christianity quickly took hold in the culture and many islanders continue to be Christian believers today.

The Cook Islands became a British protectorate at their own request in 1888, mainly to thwart French expansionism. They were transferred to New Zealand in 1901. They remained a New Zealand protectorate until 1965, at which point they became a self-governing territory in free association with New Zealand. In that year, Albert Henry of the Cook Islands Party was elected as the first Prime Minister. Sir Albert Henry led the country until he was accused of vote-rigging. He was succeeded in 1978 by Tom Davis of the Democratic Party.

Today, the Cook Islands are essentially independent ("self-governing in free association with New Zealand") but New Zealand is tasked with overseeing the country's defence.

On June 11, 1980, the United States signed a treaty with the Cook Islands specifying the maritime border between the Cook Islands and American Samoa and relinquishing its claim to the islands of Penrhyn, Pukapuka, Manihiki, and Rakahanga.